Here we have the Shimano Sahara FI. This is another spinning reel from Shimano that comes packed full of their standard features that you would expect from one of their reels. This spinning reel offers exceptional power and smoothness in a lightweight spinning reel that you can count on.

In this Shimano Sahara FI spinning reel review, we’re going to see if the features and performance of this reel are worth the small $80 price tag. Plus, at the end, we’ll stack the Shimano Sahara FI up against a few other reels to see how they compare. Let’s jump into it! 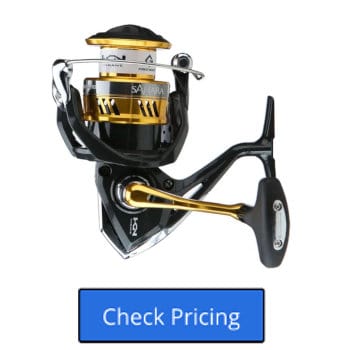 First, let’s talk about the body of this reel. You get the G Free body with the Shimano Sahara FI. The goal of this design is to keep the reel’s center of gravity closer to the rod. By doing this, Shimano’s G Free body reduces the amount of fatigue the angler experiences when fishing over long periods of time.

Moving into the heart of the reel, you’ll find the Hagane gearing system, which is something you’ve likely heard about before. This state of the art technology offers a desirable smoothness even when using the reel in saltwater.

No cutting work is used to the teeth of the drive gear. Shimano uses a 3D design and cold forge technology for pristine design and craftsmanship on their reels. Forged metal leads the pack when it comes to producing strong and powerful reels at an affordable price.

Another great component of the Shimano Sahara FI is the X-Ship gear durability. This feature supports the pinion gear on both sides of the bearings to keep everything in perfect alignment with the drive gear.

The result is no flexing and gears that will stay in place even when retrieving a larger fish than you bargained for. Reduced friction on your casts will help you cast longer distances even when using lighter lures and fishing smaller models like the 500 and 1000 models.

The underlying trend of this reel is that you’re getting a lot of bang for your buck. Many anglers (including this one) are always concerned about purchasing bottom dollar reels because you get what you pay for, but in this case, I think the Shimano Sahara FI holds up as high performing spinning reel at an affordable price. This reel would be a great choice for a beginner or someone looking to expand their reel selection.

The Shimano Sahara FI is a value reel and is available HERE. 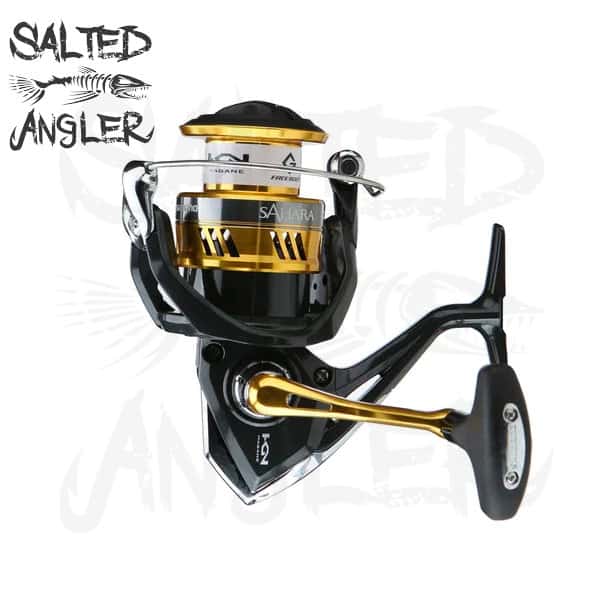 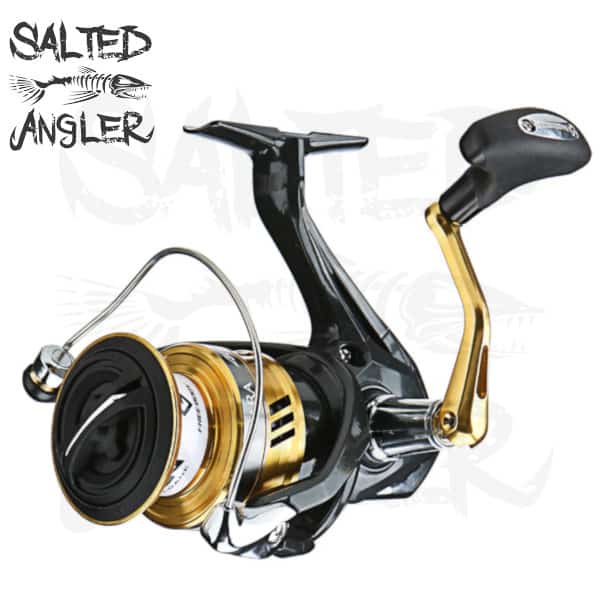 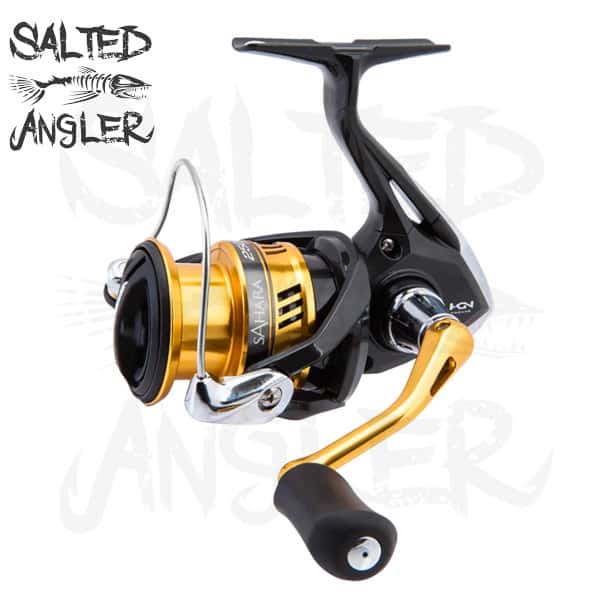 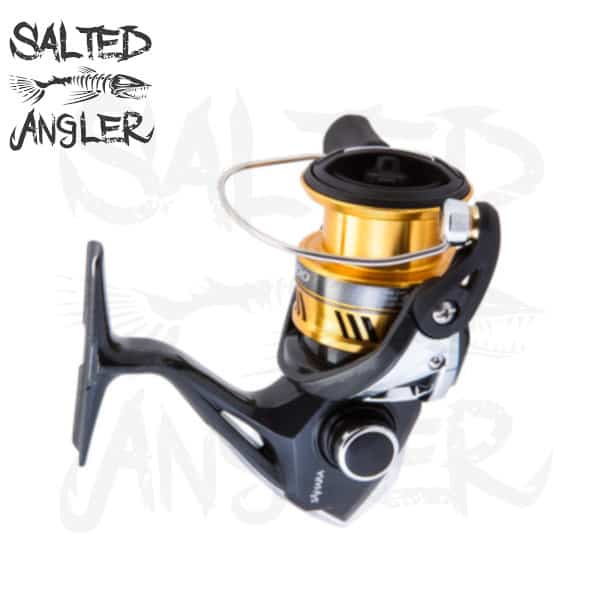 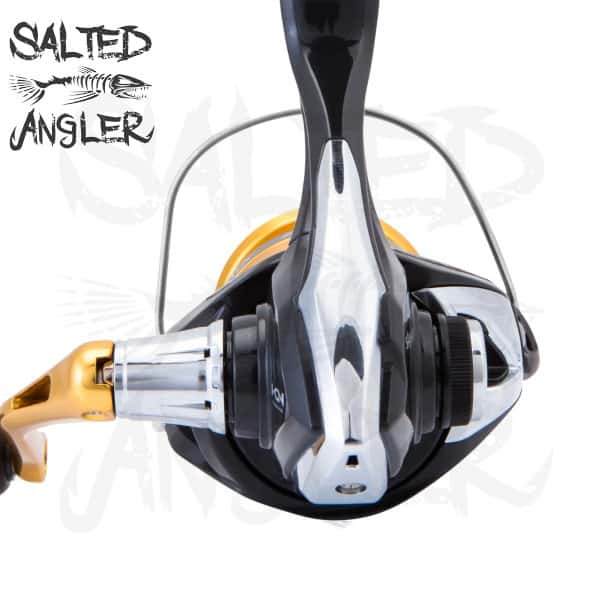 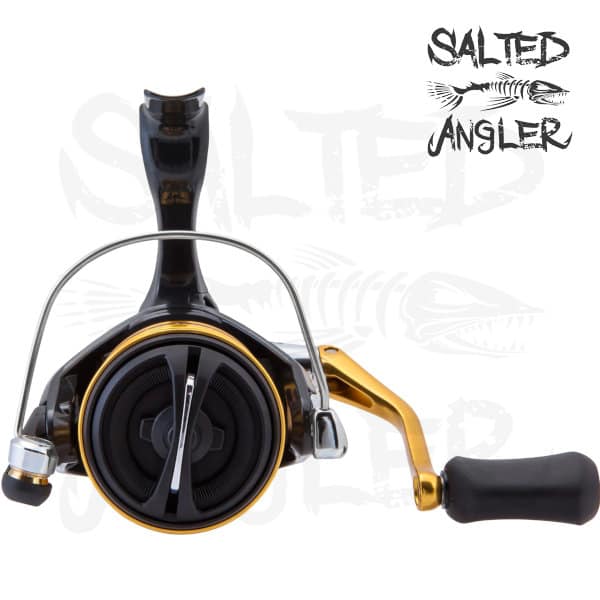 G Free Body – The G Free body is a patented design direct from Shimano. This feature moves the center of gravity on the reel closer to the butt of the rod. The end result is less fatigue because it takes less work to hold the reel and crank on retrievals.

Hagane Gear – The Hagane gearing is a cold-forged 3D cutting technology that limits the amount of cutting necessary to machine the gears. Shimano is able to produce high quality and top-performing reels for affordable prices due to their systems, including this one.

X-Ship Technology – The X-Ship technology is one of my favorite features because the worst thing you can have is a reel that feels like it’s holding back. I know you know what I mean. Sometimes when you fish with a cheap reel, you feel like your getting friction on your casts, and you can almost hear it in the way the line fall off the spool.

With the X-Ship technology, you won’t have to worry about that problem. The design of the pinion gear and bearings keeps everything in perfect alignment. The end result is less friction, longer casting distance, and an overall smoother feel on the reel.

Graphite frame, rotor, and side plate – Quality and craftsmanship is at the center of everything they do at Shimano. We love this company simply because we think they build good reels from their cheapest to the most expensive. With the Shimano Sahara FI, you get graphite all around, which reduces flexing and offers durability and strength.

Something that a lot of anglers have a problem with is the lack of an anti-reverse switch on this reel. I see it as unnecessary if the reel has a great drag system, which this one does. The anti-reverse is another area to corrode and gather dirt and sand.

We’ve also noticed during our research and talking to other anglers that some have a problem with the overall design of the reel. They claim that the handle of the reel is too close to the foot, so you don’t have enough space to crank without hitting your knuckles off the reel. I didn’t experience this problem, but I have heard about it on separate occasions: (maybe I have small hands?)

Anyway, the Shimano Sahara FI comes in six different models ranging from 500 to 5000. As you could imagine, the 500 model is pretty small but quick for those who are serious about finesse angling and fishing light tackle in shallow water. For only six pounds of drag, we’d like to see the reel weigh a bit less than 6.9 ounces though. You could get the Daiwa Exceler LT 2500 for 7.2 ounces and get 22 pounds of drag.

Many of you will likely fish the 2500 model, which has 20 pounds of drag, a 5.0:1 gear ratio, a 29-inch retrieval rate, and it weighs 8.8 ounces. It’s not terribly heavy, but it’s not the lightest reel we’ve looked at from Shimano.

I’m a huge fan of inshore topwater fishing, and when I fish the surface, I love to use buzzbaits. I knew I found a great reel that would work perfectly for this. I took my Shimano Sahara SHC3000HGFI with six-pound monofilament and hit the water.

The 6.2:1 gear ratio on this reel works perfectly for topwaters because it’s the perfect speed you want for the right retrieval and presentation of the reel.

I started with the rod tip high in the air as the bait hit the water. Running the lure through the weeds within the first 15 minutes on the water, I had myself a three-pound spotted seatrout. The retrieval was quick and smooth, and the drag system works great. You don’t feel any friction on your cast, and even after a long fishing day, you don’t experience any fatigue.

As promised, we’re going to stack this reel up against some similar spinning reels in the same price range. Let’s see how the Shimano Sahara FI compares.

First, let’s take a look at the Daiwa Exceler LT. This carbon constructed spinning reel uses an air rotor and bail made with machined aluminum. The reel also offers Daiwa’s digigear design, which is similar to the hagane feature of precise machine cutting.

You’ll get the Daiwa Exceler LT for a tiny bit cheaper, but the main downside is that it’s not exactly suitable for saltwater. One advantage of the Daiwa Exceler LT is the fact that you get quite a bit more drag for your weight as you go up in size. The 2500 only weighs 7.2 ounces but offers 22 pounds of drag. Read the complete Daiwa Exceler LT spinning reel review HERE.

Next, let’s drop in with another spinning reel called the Pflueger Purist. This one is lightweight with a sealed carbon fiber drag system. This reel is excellent for inshore saltwater fishing because it has nine corrosion-resistant stainless steel ball bearings. We would have to say that gives it a leg up in the salt against the Shimano Sahara FI.

The reel is a bit heavy, and it doesn’t offer a lot of drag even at the larger model sizes, but you do get a 9+1 bearing system, which is buttery smooth and fun to use. Read the complete Pflueger Purist spinning reel review HERE.

Finally, hoping to end on a high note, we’ll look at the Penn Fierce II spinning reel. I don’t know what it is about these all-black reels that gets me excited. I think they look incredible, and this is a reliable, affordable reel for anglers of all skill levels.

They improved the finish on the reel to make it more corrosion protected against the saltwater. Penn also included their oiled felt drag system in this one that is oh so smooth. Read the complete Penn Fierce II spinning reel review HERE.

Overall, another great affordable spinning reel. It’s hard to compare all of these because they’re all pretty much four out of five stars. I would recommend checking out any of these four reels.

Well, that’s that. What do I think about the Shimano Sahara FI? I think it’s a standard affordable spinning reel that works in both salt and freshwater. Nothing about this reel impresses me or gives me that excited feeling when I head out to the water.

That said, if you’re looking for a highly reliable spinning reel from a company with a reputation for performance. Plus, you want to get all of that for under $100, you’ve found the right reel in the Shimano Sahara FI. Happy fishing!