Shimano has long been know as one of the leaders in the fishing tackle industry and has consistently produced quality reels for the mass market since 1978.

Shimano is best known for its wide offering in spinning reels and baitcasting reels.  If you were to ask 10 anglers what is the best ____ reel we are sure that you would have a handful of people say that it is the Shimano ____.

The reason for this is that Shimano is a big brand and they do manufacture quality reels that are known for being very smooth. 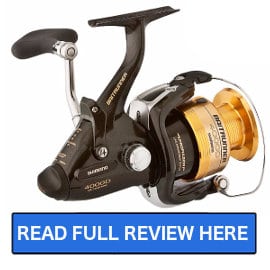 The Shimano Baitrunner D is one of the most sought after bait feeder or baitrunner reels on the market.  If you are fishing with either live or cut bait in a situation where you want the fish to be able to pick up the bait and run with it then you need this type of reel.  Read Baitrunner Fishing Reels Explained for more information.  READ THE FULL REVIEW 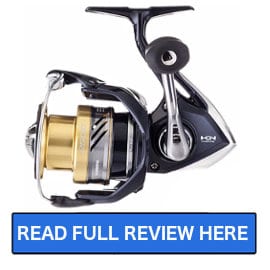 The Shimano NASCI is an entry level saltwater spinning reel that is well suited for inshore fishing.  Here is your opportunity to get a Shimano reel without breaking the bank.  Some of the quality features you will get are Cold Forged Gearing, Composite body, X-Ship Technology, and Shimanos Coreprotect Water Resistance.  READ THE FULL REVIEW 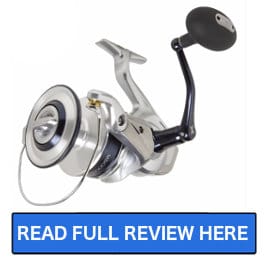 The Shimano Saragosa has been part of the main stable of Shimano saltwater reels for over a decade with the Saragosa SW being released in 2013, it is one of our favorite saltwater reels.  This is Shimano’s mainstay for the mid-tier saltwater market or larger spinning reels.  If your looking for a large capacity spinning reel that has what it takes to land your pelagic species then this is a good choice as it contains many of the same components of some of the more expensive Shimano reels.  READ THE FULL REVIEW 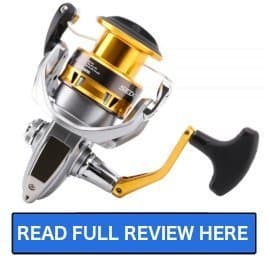 The Shimano Sedona FI is the latest version of the very popular Sedona FI spinning reel.  This is a great entry level reel from Shimano and has many features found in more expensive reels. Whiule Shimano states that the reel is sutiable for saltwater as well as freshwater, I would do this sparingly as there is little protection from the elements.  READ THE FULL REVIEW 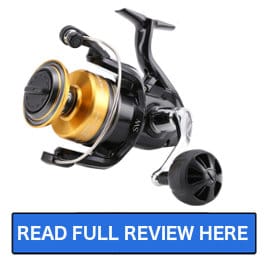 The Shimano Socorro SW is a no-frills saltwater spinning reel designed for your larger species such as Bull Reds, Big Snook, Tarpon and Sailfish. If you are looking to get a Shimano reel that won’t set your bank account back to much and will still deliver the goods for your larger 5000-10000 sized reels then this would be a good pick. READ THE FULL REVIEW 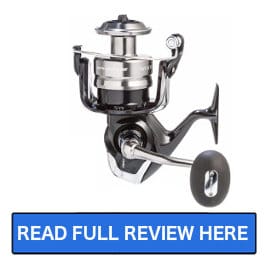 First released in 2014 the Shimano Spheros SW is a larger saltwater spinning reel and fits in between the Shimano Socorro SW and the Shimano Saragosa SW when it comes to price and features.  This is a lower cost Shimano reel that is specifically designed for your larger saltwater gamefish available in sizes 5000-20000.  READ THE FULL REVIEW 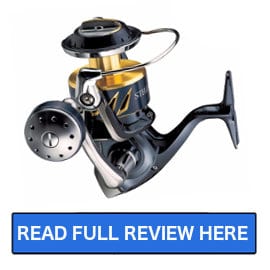 Some have been known to call the Shimano Stella SW “The King of Saltwater Spinning Reels” and with good reason.  First is the quality of the reel with its high-end components and attention to manufacturing quality.  If you are seeking to own the Mercedes of big game spinning reels then this is it, however it comes at a hefty price, the question is, is it worth it?.  READ THE FULL REVIEW 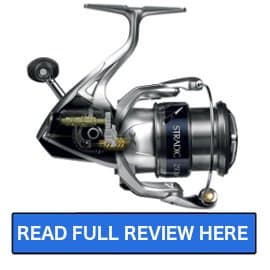 TRhe Shimano Stradic FK is the most recent revision of the infamous Stradic lineup from Shimano.  With precision Hagane gears surrounded by a Hagane body, Fluid Drive and a solid Front Drive the new Stradic FK is a winner.  This is a solid inshore reel that is both lightweight as well as durable for all day saltwater fishing.  READ THE FULL REVIEW 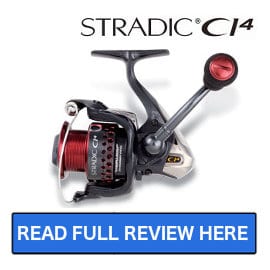 The Shimano Stradic Ci4+ spinning reel was released in April of 2016 and has a few upgrades over its predecessor the Shimano Stradic Ci4 spinning reel. The most noticeable being the addition of Shimano’s X-Ship technology that has a double bearing supported pinion gear that leads to a much smoother retrieve especially when cranking under heavy loads.  READ THE FULL REVIEW 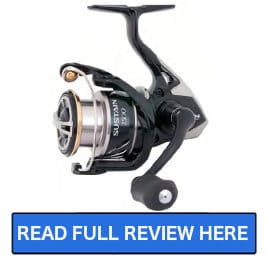 There is a reason that the Shimano Sustain FI won the “Best of Category – New Saltwater Reel” at ICAST in 2017.  This is an awesome reel that finds it home between the high-quality lightweight Shimano Stradic Ci4+ and the very high-end Shimano Stella SW which has a bit more weight to it but is the king of saltwater spinning reels.  READ THE FULL REVIEW 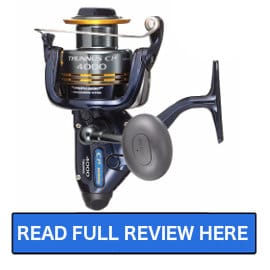 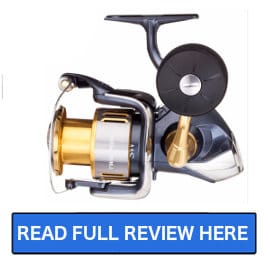 For those of you looking for a very high-quality saltwater spinning reel that does not have the $1,000+ budget required for the Shimano Stella SW take a look at the Shimano Twin Power SW.  This reel is nearly waterproof and has many of the same components as the more than twice the price Shimano Stella SW.  It is not a Stella but I think I would take two of these over one Stella SW.  READ THE FULL REVIEW 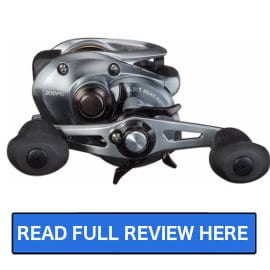 The Shimano Curado I has been replaced by the Shimano Curado K.  We like to call the Shimano Curado I the value segment of low profile baitcasting reels from Shimano.  The frame is made of aluminum but is still lightweight at just 7.4 oz. and strong enough to not flex even under a good load.  The X-Ship technology combined with the shielded anti-rust stainless steel ball bearings assures that the reel is smooth.  READ THE FULL REVIEW 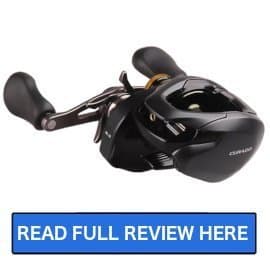 The Shimano Curado K replaces the Curado I in the lineup of low profile baitcasting reels from Shimano.  The frame is made of aluminum but is still lightweight at just 7.6 oz. SVS infinite braking, MicroModule gearing shielded A-RB bearings assures that the reel is strong and smooth.  READ THE FULL REVIEW 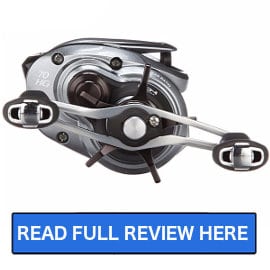 The Shimano Curado 70 is a very lightweight baitcasting reel at just 6.5 oz and shares similar features of the Curado I but adds the rigidity of the Hagane body.  What most people notice first about this reel is the small form factor and how easy it is to just cup on the palm of your hand.  If you fish all day then this will make it easier and yes Shimano rates this reel for saltwater.  READ THE FULL REVIEW 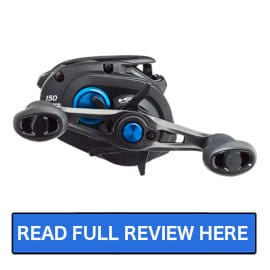 The Shimano SLX series of reels start with the entrylevel SLX which is a great reel and then they start to modify the braking systems to provide you with more adjustments with the SLX XT.  The final reel in the series, the SLX DC which has a digitally controled braking system was the winner of the 2019 ICAST Best of Show in the freshwater category.  READ THE FULL REVIEW 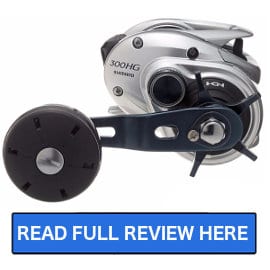 If you are targeting larger species in either fresh or saltwater and want to throw those larger baits and lures then this is a great choice.  The Trans 200 is the smallest and is perfect for inshore fishing, then there is the Tranx 300 and its bigger brother the Tranx 400 give you plenty of stopping power and leverage using the Power Handle knob.  The 200 came to market in 2018 and the 300/400 came to market in 2017 after people who had fallen in love with the original Tranx 500 and requested smaller models.  READ THE FULL REVIEW 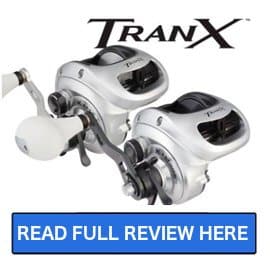 If you are a baitcasting reel aficionado and love to chase the larger hard fighting fish such as Snook, Bull Reds, Tuna and striped bass then the Tranx 500 should be on your list of reels to consider.  The entire reel is designed around what Shimano calls the HEG technology or High Efficiency Gearing. 25 lbs of drag and a large power handle make this a reel that can bring the big boys back to the boat.  READ THE FULL REVIEW 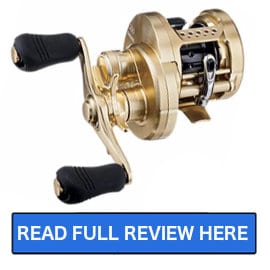 If you are looking for the top of the line round conventional reel then you have found it.  The Shimano Calcutta Conquest is designed specifically for Spin, Chatter and Crank baits.  Inside you will find the Micro Module Gearing that is super smooth. If you like fine watches then you will be impressed with this impressive reel.  READ THE FULL REVIEW 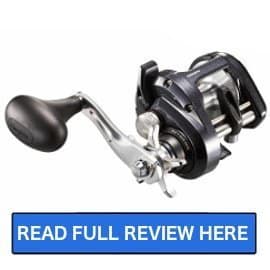 The Shimano Tekota A levelwind is the newest version of the Tekota reels and has several nice upgrades that include; Coreprotect water protection especially good for saltwater, Hagane body and a 20% smaller frame that fits easily in your hand. If you are looking for a good reel that won’t break the bank for fishing offshore take a look at the Shimano Tekota A Levelwind 500/600. READ THE FULL REVIEW. 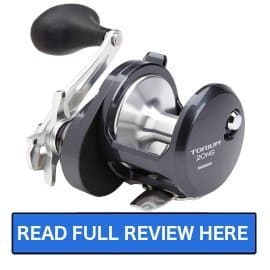 The Shimano Torium Star Drag reel is an excellent quality mid-tier open faced conventional reel.  If you are looking for a small to medium sized conventional reel for jigging and bottom fishing that can handle the larger fish then this is an excellent choice.  With features like a full metal body, heavier gearing and a strong drag system you will not be dissapointed. READ THE FULL REVIEW.