In this Penn Battle II review, I will show you why it is one of the best all-around reels you can buy for your hard earned money.

One of the things I love is that Penn has been able to keep their price point affordable for the average angler, while still producing a quality reel, that if well cared for, will last you for years.

With a lot of anglers looking for a quality reel in the $100 range, the Penn Battle II fits the mark.  I understand that $100 is not chump change for a lot of people but if you want a quality reel that will last for years then this is a solid contender. 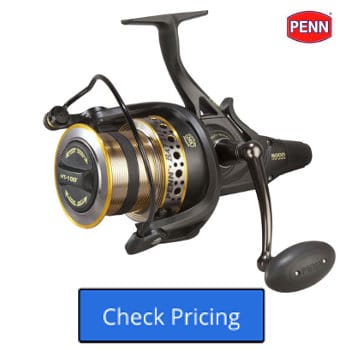 The new Penn Battle II first released in 2014 is an excellent mid-tier reel that I would say falls between the Shimano Stradic FK and the Pflueger President from a price and quality standpoint.

Another reel that I want you to put in your options in this price range is the Daiwa BG SW fishing reel.  If you are looking for a lighter weight reel then please check out the Daiwa Fuego LT. 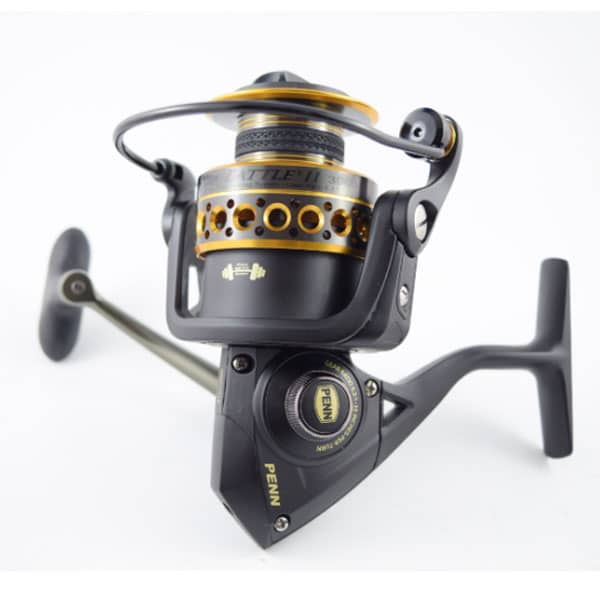 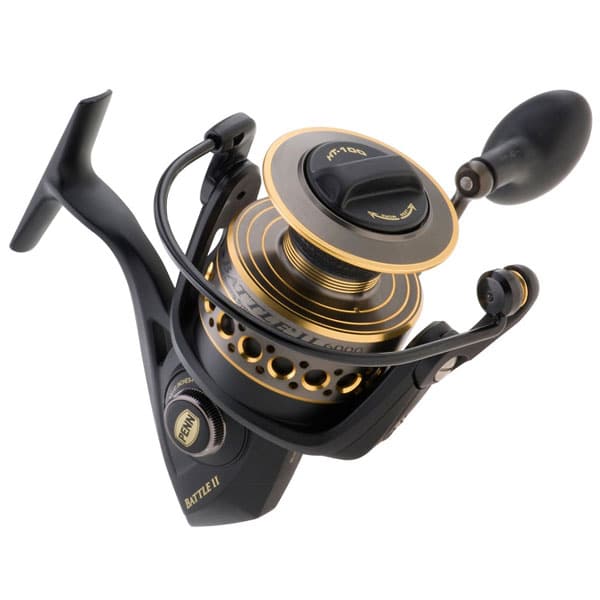 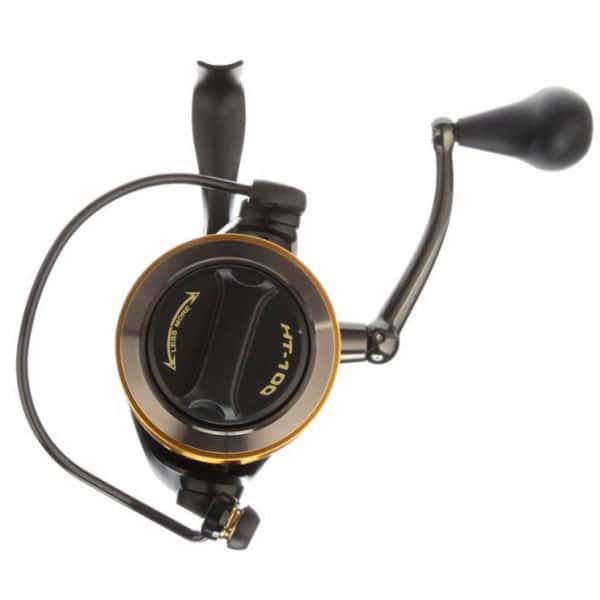 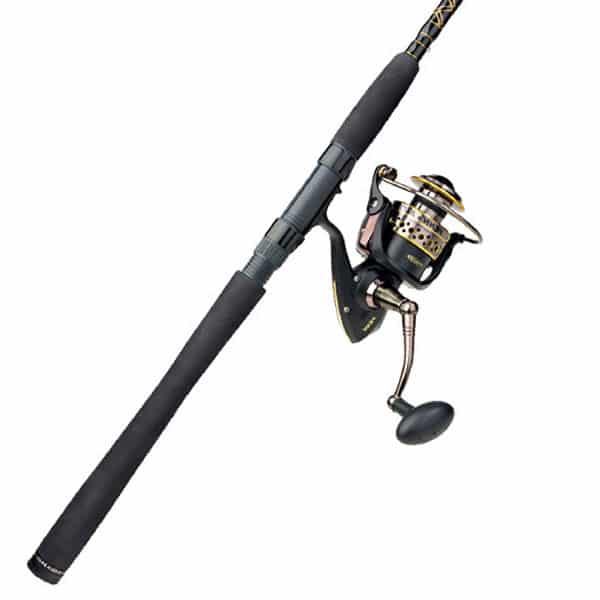 If you’re looking for a solid everyday reel that you can rely on, whether you’re the avid weekend angler or a local charter captain, the Penn Battle II is sure not to disappoint you.

Right out of the box the reel has a very solid feel to it in weight and build quality.  The rubber knob feels great in your hand even after hours of fishing, and I find the retrieve to be very smooth.

Penn offers 8 models to choose from, starting with the 1000 which is an excellent choice for small freshwater species all the way up to the 8000 for your larger species like Tarpon and Shark.

If you’re just getting started and looking for a good all around reel for inshore fishing, I would go with either the 2500 or the 3000 paired with something like a 6 1/2 foot light-medium Ugly Stik GX2 fishing rod or for a few more dollars and with a lifetime warranty, a 7 foot Star Stellar Lite series fishing rod.

If you are budget conscious but want quality, then this is a great way to get started on the water with a solid reel and rod combo for a very affordable price.

HT-100 carbon fiber drag washers – HT 100 drag system – which utilizes keyed carbon washers in place of the traditional felt washers will lengthen the lifespan of the reel and provide a very smooth non-jerky drag when under load from a retreating fish.

By using a keyed washer, there is access to both sides of the washer to provide a smooth drag while increasing the possible drag pressure by 20%.

The HT stands for the High Tech which is a carbon fiber laminated on fiberglass.  The 100 in the name stands for the equivalent of 100 miles of line being taken from the reel in original testing without any noticeable degradation which is pretty impressive.

Instant Anti-Reverse – The instant Anti Reverse eliminates the back play on the rotor when you set the hook.  This is accomplished by using a one way bearing in the reel design.

Heavy-duty aluminum bail wire – The Penn Battle II has an extra heavy duty bail wire that will withstand the test of time and should not warp over a long period of time. This is important as a warped bail will lead to inferior line management.

Improved Paint Quality – The better paint quality protects the reel against saltwater spray and chemicals which will always lead to corrosion if you are not careful. This was a reported problem in the previous model.  It is nice to see that Penn listens to the feedback of their customers and has addressed this issue.

5 Sealed Ball Bearings – There are now five stainless steel ball bearings.  This is the same number of bearings as in the first version of the reel, but now they are stainless steel which adds additional protection against the corrosion from saltwater.

Superline Spool – One of my favorite features is the addition of line capacity rings on the spool which make sure that you always know how much line you have remaining on the spool.  I also like the rubber inlay on the spool which means that I can load the spool directly with braided line and skip having to back it with mono.

Some guys still prefer to back with the mono and I am becoming one of them since the mono provides a layer of protection on the inside of the spool.  Making sure that your spool is sufficiently loaded but not overloaded is key when you hook that big one, as you want to be aware of how much line is left on the reel so your catch of the day does not leave you spooled! 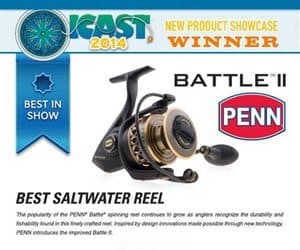 The Penn Battle II with its open face reel design is offered in a total of 8 sizes, the smallest being a 1000 and the largest an 8000. All would be considered to have a medium-high gear ratio with the smallest 1000 model starting at 5.2:1 up to the largest 8000 model which offers a 6.2:1.

These gear ratios make it easy to catch all different sizes of fish from your smaller inshore species such as trout and smaller reds and snook, up to your large tarpon and shark in areas like Boca Grande, FL.

As I mentioned earlier, I am a big fan of the front drag HT 100 drag system which utilizes carbon washers in place of the traditional felt washers – this will lengthen the lifespan of the reel.

The maximum drag setting starts at 9 lbs on the 1000 series and goes up to a full 30 lbs on the 8000 series. Some people feel that the Penn Battle II is a heavy reel, I would describe it as sturdy. Reel weight starts at roughly 8 ounces on the 1000 series and goes up to 30 ounces on the 8000 series, the strongest and largest of the Penn Battle II series.

If weight is a concern then take a look at the Daiwa Fuego LT for about the same amount.

When fishing the reel, it might at first seem a bit heavy, I personally like the solid feel but I know a lot of guys that prefer to have a slightly lighter setup to balance out the medium light to medium rods they use.

If this sounds like you, then check out the review on the Pflueger Supreme XT or the Daiwa Fuego LT.

The new spool with line capacity rings is great as you know at a glance just how much line you have available. It has been my personal experience that it is better to not load the reel to its full “capacity”.

The reason I say this is that I and many other anglers have had issues with wind knots, and if you are fishing with a quality braided line you know that it does not come cheap.

Also note that if you manually close the bail rather than using the handle, you will find fewer issues with wind knots, but that is just my personal experience.

For a reel that is in between the Penn Battle II and the Shimano Stradic FK, I would recommend taking a look at the Pflueger Supreme XT which is a high-quality reel that does not cost a fortune.

The reel is made of high-quality materials such as magnesium and even incorporates carbon fiber into the handle thus keeping the reel strong and lightweight.  Read the full review of the Pfleuger Supreme XT HERE.

For a reel that is a step up from the Penn Battle II and the Pflueger Supreme XT, I would recommend taking a look at the Shimano Stradic FK which is a high-quality reel that still does not cost a fortune.

The reel is made of high-quality materials around the Hagane design elements that incorporate cold forged gear drives.  Read the full review of the Shimano Stradic FX HERE.

I am confident that it will be with the Penn Battle II and I can highly recommend this reel especially if you are just getting started and want a good reel for the money.

I am glad to see that Penn decided to update the Battle to the new version and I am very happy with the features such as spool rings, the increased drag pressure, higher quality paint, and stainless steel ball bearings.

I think that we will see the 2500 to be a big win for both the angler looking for a mid-sized reel as well as for Penn as a company.

While this is a great saltwater fishing reel, one must be careful not to submerge the reel as it is not fully sealed. But that is to be expected in this medium class price range.  If you do accidentally submerge the reel, make sure that you are quick to clean it when you get back home.

If you are just starting out and you are like me and want a good quality reel without breaking the bank then this is a great choice.  If you do not already own a decent rod then I can highly recommend that you look at acquiring your new Penn Battle II as a Rod and Reel Combo.

You should be able to find what you are looking for between $99 and $149 depending on the size.