In this review of the Daiwa Costal SV, we take a look at a new-sized baitcaster designed specifically for inshore fishing making this ideal for Gulf Coast redfish and speckled trout specialists. Anglers fishing light tackle and small plastics will enjoy the Daiwa Costal SV many features.

You can use this baitcaster inshore and in many saltwater applications along the coast. In this Daiwa Coastal SV review, we discuss the pros and cons of using a small baitcaster. 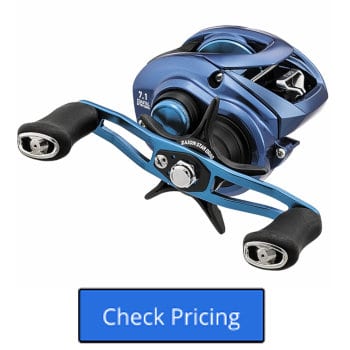 The Daiwa Coastal SV is small, compact, and fully functional with a deeper 150 size spool and a 100 size reel body. The smaller reel body is palmable and comfortable, but you still get the needed capacity with the 150 size spool.

The spool is strong, so it can tolerate the pressure of braided line when it is loaded up with a bull red pulling drag. You also get the T-Wing System, which helps the line move freely without friction through the levelwind system.

While the reel itself is small, it’s built with a durable aluminum frame and side plate. Anglers get the state of the art Zaion star drag, which contains a high-density carbon strain material 20% stronger and 50% lighter than regular nylon or aluminum.

Cranking is easy and comfortable using the 100mm Swept Handle as well. If you end up hooking a larger redfish or something stronger, you’ll have the torque you need to crank it back.

The Daiwa Costal SV is a phenominal baitcasting reel and is available HERE.

Daiwa typically includes this technology in their freshwater bass reels, but they threw it into the Daiwa Coastal SV for anglers fishing inshore waters that often face windy conditions.

When you’re fishing shallow water with very light bait, this allows you to cast into the wind without backlashing. And this reel also works really well with people throwing popping corks.

Many people experience experience backlashing when casting popping corks for trout and reds, but you won’t have that problem with this reel. 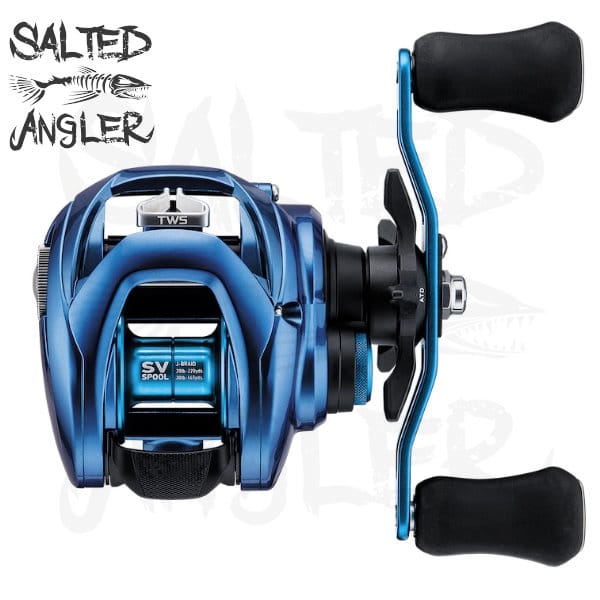 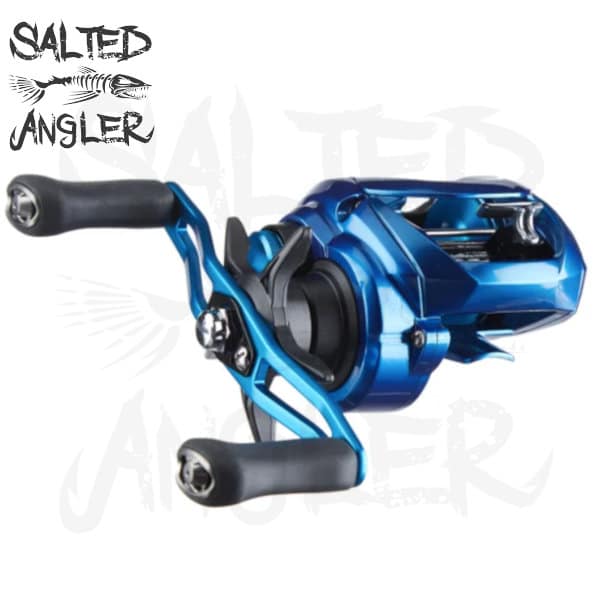 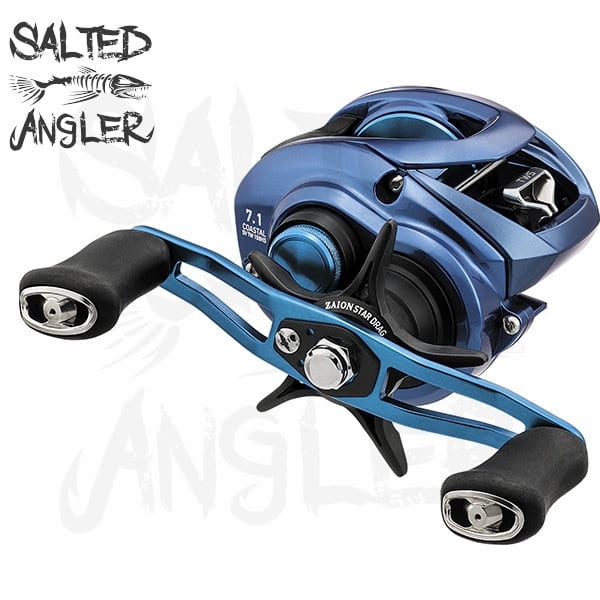 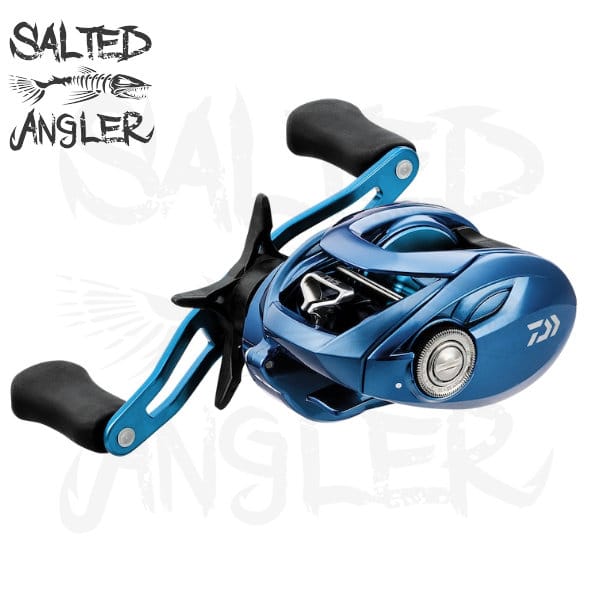 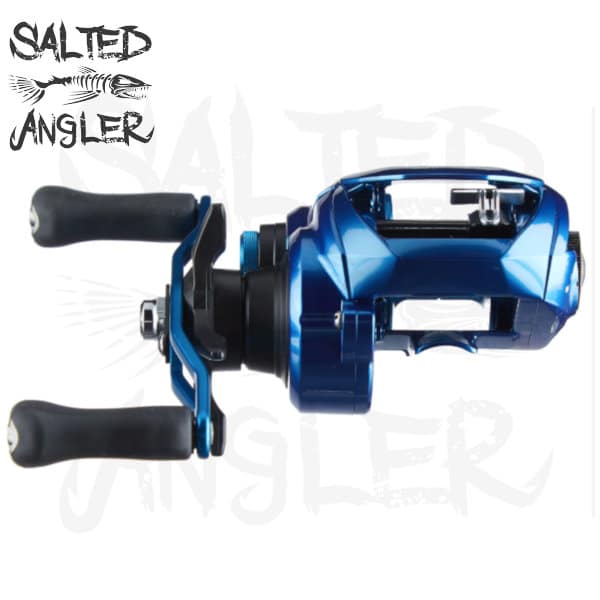 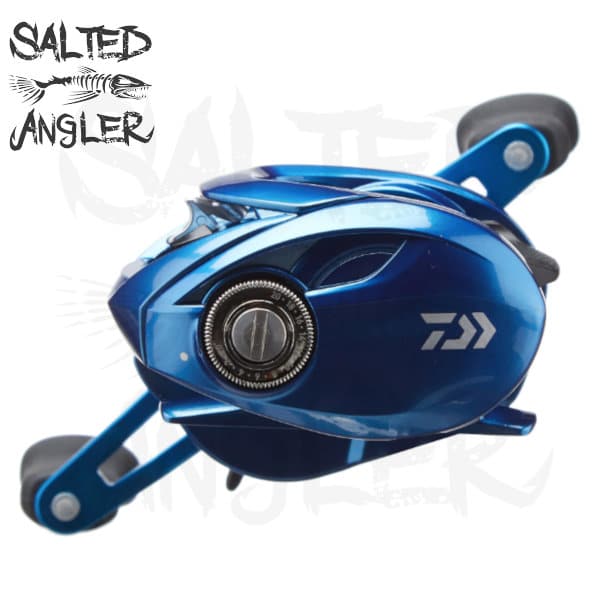 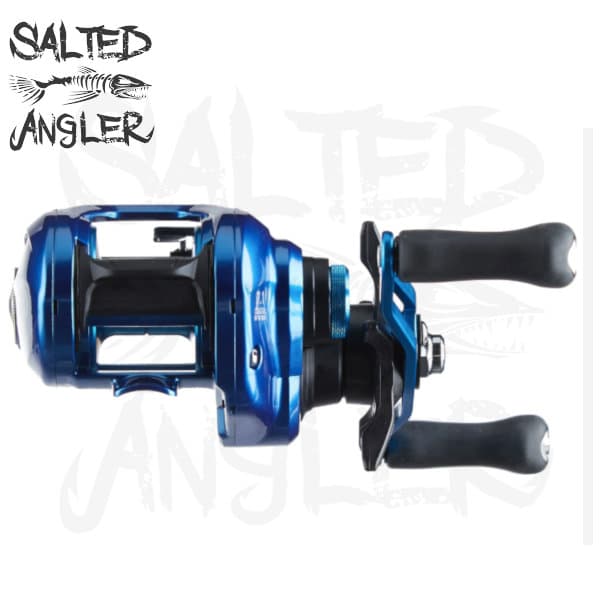 Aluminum Frame – This reel is built using a stout aluminum frame that provides the stability and strength you need. The aluminum frame is great for those inshore situations where you pull a larger fish than you bargained for.

Aluminum Side Plate – The aluminum side plate perfectly complements the whole aluminum frame design of this baitcaster and adds the durability that is needed to stand up to some of the larger bull reds and slab flunders we find on the Gulf Coast.

8 Bearing System (2CRBB + 5BB + 1RB) – This eight bearing system consists of two main corrosion resistant ball bearings. These are treated stainless steel bearings that offer 12 times the normal life expectancy hold up much better for harsh saltwater fishing. You also get five bearings on the interior of the reel with one roller bearing. Overall, the bearing system offers smooth performance of the reel and protection from extreme saltwater fishing.

First, friction and uneven line lay during the retrieval. The “T” opening is what allows the line to flow freely through the wider gap when casting. This wider section lowers the amount of friction that you would experience with a traditional baitcaster.

When you have a narrow gap, the line slows down during your cast, which can reduce your distance.  Lastly, when you retrieve your line, the T part dips down into the reel to promote even distribution of your line on the spool.

Air Brake System – My favorite feature of this reel is the air brake system because it helps people fishing light tackle in shallow waters. As we discussed previously, Daiwa included this technology in their baitcaster for all the anglers fishing along the gulf coast to help prevent backlash when casting into the wind.

If you have had a bad experience with magnetic brakes in the past, you are in for a treat.  Daiwa uses a completely new design that uses an inductor cup that moves with the speed of the spool causing just the right amount of braking power when it is needed and allowing the spool to spin freely when needed which results in longer casts and almost no chance of a backlash.

150 Size SV Spool – Another great feature of this reel is the fact that they used a 150 size SV spool on the 100 size reel body. You get the line capacity you need to handle larger fish inshore, but you still have the comfort of the 100 size body.

100mm Swept Handle – Daiwa included their 100mm handle, which comes in right when you need it. You’ll get the torque and cranking ability you need for larger fish, and it still feels comfortable in your hand without causing fatigue.

As the names says, the Daiwa Coastal SV is designed from the ground up for the coastal inshore fisherman. First, this small and compact reel offers three different models with the difference being in the gear ratio impacting your line retrieval rate.

Anglers who like to throw small lures and popping corks will really enjoy the air brake system because it will help prevent backlash. If you have found in the past that the wind becomes your worst enemy and you end up with a lot of birds nest when fishing baitcasters, you’ll want to give the Daiwa Costal SV a try.

With the weather starting to cool, the big bull reds are starting to come out of the deeper water so we headed down to the Destin pass to try our luck.  Recently I have been having a lot of luck using a Z-Man Diezel MinnowZ under a popping cork.  I have really grown to like the VersaMaxx Popping Cork as it is big and allows you to wrap the line for varying depths on the fly.

I got started early in the morning and as the sun came up so did the wind. This is when I traditionally switch from my baitcaster to my spinning setup.  I was able to get long casts and I never experienced a single backlash.  As a matter of fact, I purposely cast directly into the wind to see if I could get a backlash and I was unable to do so.

I managed to hook into a few reds that were around 24″ in length and one borderline Bull at 27″.  The reel was smooth with the drag and the larger handle made it easy to get the leverage I needed.

Overall I am impressed with the reel and would highly recommend it to anyone looking for a quality saltwater inshore baitcasting reel.

Now let’s take a look at some other similar reels to see how they stack up to the Daiwa Coastal SV.

First, we have the 13 Fishing Concept C. This reel is about the same price point at the Daiwa, and it offers a tight low profile that fits nicely in the palm of your hands. This reel boasts a 6-way centrifugal braking system that allows you to adjust the six pins of the braking system, so you have total control over your cast.

We’re comparing the Shimano Curado 70 with the Daiwa Coastal SV because they are two of the best light tackle baitcasters out there in this price range. This reel positions the pinion gear close to the centerline with a large diameter drive gear. The result is more power and smoother delivery.

You also get the Hagane metal body, which offers superior balance and prevents flexing. This reel comes with the SVS Infinity Brake System as well, which offers the maximum amount of adjustability with 4-6 settings and an adjustable brake dial offering a ton of control and brake performance for all conditions.

The main issue some anglers will run into is the max drag of 10 on this reel. As we said, this is a light tackle reel ideal for shallow inshore fishing, so you’ll want to keep that in mind if you’re in the market for a reel of this type. You should also expect to pay a bit more for the Daiwa Coastal SV. Read the full Shimano Curado 70 review HERE.

Lastly, let’s take a look at a compact baitcaster with an oversized spool and increased line capacity. The Quantum Smoke S3 PT tries to increase performance while still remaining lightweight and compact.

This baitcaster uses an adjustable centrifugal braking system that allows anglers more control over their line. The ACS 4.0 allows you to adjust how much braking force you use so you can get the most out of each cast. Do I think this is better than the air brake and T-Wing system? Hmm, not so much.

Although, you do get the zero friction design, which takes two ball bearings and helps hold the pinion gear in place to prevent all friction on the spool shaft. This feature does increase casting distance and smoothness, so it’s almost like splitting hairs to pick one over the other.

You also get a 10+1 bearing system with the Quantum Smoke S3 PT that they’ve tested in a saltwater torture chamber to develop the highest level of corrosion resistance and performance. To top it all off, the reel offers 25 pounds of max drag in a reel that barely weighs half an ounce more than the Daiwa Coastal SV. We know you thought it couldn’t get any better, but the Quantum Smoke S3 PT is around 30% cheaper than the Daiwa Coastal SV as well.

The main upside that Daiwa has is the braking system that makes that reel better for light tackle. If you’re looking for something with a bit more power capable of handling larger fish and lures, you’ll want to check out the Quantum Smoke S3 PT. Read the full Quantum Smoke S3 PT review HERE.

Overall the Daiwa Costal SV is a top quality reel that is designed with a specific purpose in mind which is targeting mid-sized fish inshore.  The durability of the design should standup over the course of time and the air brake system is in my opinion second to none when the wind is howling.

There are a few reels that can be had for a slightly less rich price tag, but if you are a serious fisherperson and want a quality reel then you will surely not be dissapointed with this purchase.