How to Choose a Star Drag vs. Lever Drag Reel

Let’s take a look at the two styles of conventional reels so we can learn the difference between the two types of drag systems and when one might be preferred over the other.

In the photo below you can see on the left a Penn Squall Star Drag and a Daiwa Black and Gold Star Drag.  Notice the star-shaped wheel that sits just inside the handle?  The star drag is used to progressively tighten the drag, some will have a ratchet system and some will not, they will just tighten the drag quietly.

To the right of these two reels is an image of the Penn Squall Lever Drag reel.  You can see that there is a lever that can be moved back and forth to tighten the drag to the desired setting.

One thing I personally like is that I can visually see how much drag is on the reel, this is particularly useful if I am fishing with less experienced anglers.

Most lever drag systems will also have what is called a strike setting.  The strike setting is where you want to have your drag adjusted so that you have enough drag to set the hook properly but give the fish enough drag that it goes not break the line or leader.

With the star drag, it is too easy to over tighten the drag and set yourself up for disappointment when the line breaks.

As you can see in the photo above the star drag wheel is located between the spool and the handle.  In most cases, it is pretty easy to use your thumb to add a little bit more to the drag when you are fishing.

When you do get a fish on the line this all changes.  If you are cranking the handle with one hand and holding the. rod tightly with the other it can be difficult to get you fingers between the spool and the handle to make an adjustment. 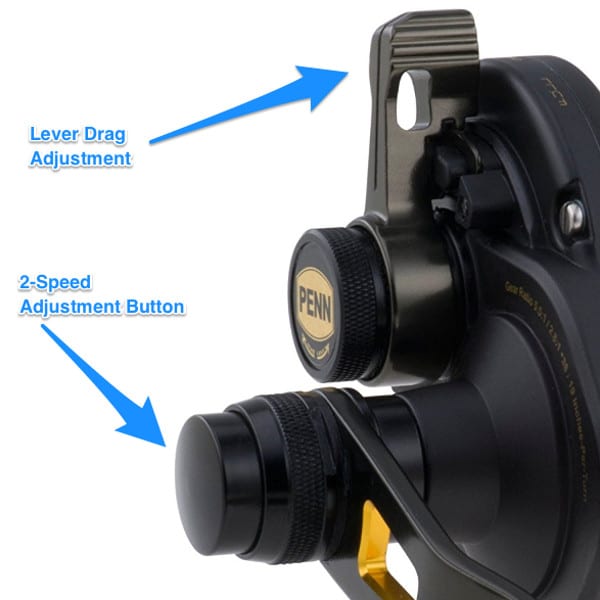 For smaller sized fish a star drag is fine and what I mean by smaller sized is anything under say 40-50 lbs.  So if you are fishing off the coast for smaller tuna, barracuda or cobia, etc. then you can look at using open conventional reels like the Penn Squall Star Drag and Okuma Cortez Star Drag.

You will find that the low profile reels such as the Daiwa Lexa 300 and Lexa 400, Shimano Tranx 500 or even the Shimano Tranx 300 and 400 have a star drag adjustment and this is fine for your smaller species.

When targeting fish above 40-50 lbs you are typically going to either have a fish that takes a lot of line off the spool or in the case of bottom fishing is an anchor that you are trying to reel to the surface.

In either of these cases, you not only want to lean towards the lever drag for the aforementioned reasons but you also probably want to take a look at a 2-speed reel like the Penn Squall 2-speed Lever Drag or the Okuma Makaira SE Lever Drag.

With the 2-speed option, you have the ability to push a button typically located in the handle and switch between a high gearing for fast retrieval of the line to a low gearing for hauling in those heavy fish.

Most anglers will tell you that a star drag reel is going to give you better castability as the spool has a tendency to spin more freely. Certain reels such as the Penn Fathom have what they call a live spindle design.

What this means is that when you throw the clutch lever into free spool mode, the spool completely disengages from the spindle, the pinion gear and everything that could potentially cause friction.  At this point, the spool is completely free to spin as it is simply riding on the ball bearings and this means that you are going to get a very long cast.

I think that this still holds true today, however with the newer technologies that have come to market in the last few years such as Magnetic cast control the lever drag reels are getting close to the star drag reels when it comes to castability.

One thing that you need to keep in mind with a free spool is that a feature like a centrifugal brake will come in very handy for someone that has a less educated thumb to prevent back spooling.

With some of the newer technologies that are coming on the market and multiple sealed ball bearings, the lever drag reels are getting close to the star drags when it comes to castability.

These additional features that allow for better castability in the lever drag are going to cost you a few additional dollars and are typically only found in the higher end lever drag reels.

At the end of the day, you are going to have some people that swear by a star drag and others that swear by a lever drag.  From our point of view here are our preferences:

If you have the opportunity to try several star drag reels and several lever drag reels before you purchase your own, I think that is the way to go.

If that is not an option and you are fishing for smaller fish under 30 lbs then get yourself a good star drag reel and practice casting with it.

Remember, you don’t have to be on the water to practice casting.  You can attach a weight and go to your local sporting field and practice to educate your thumb.